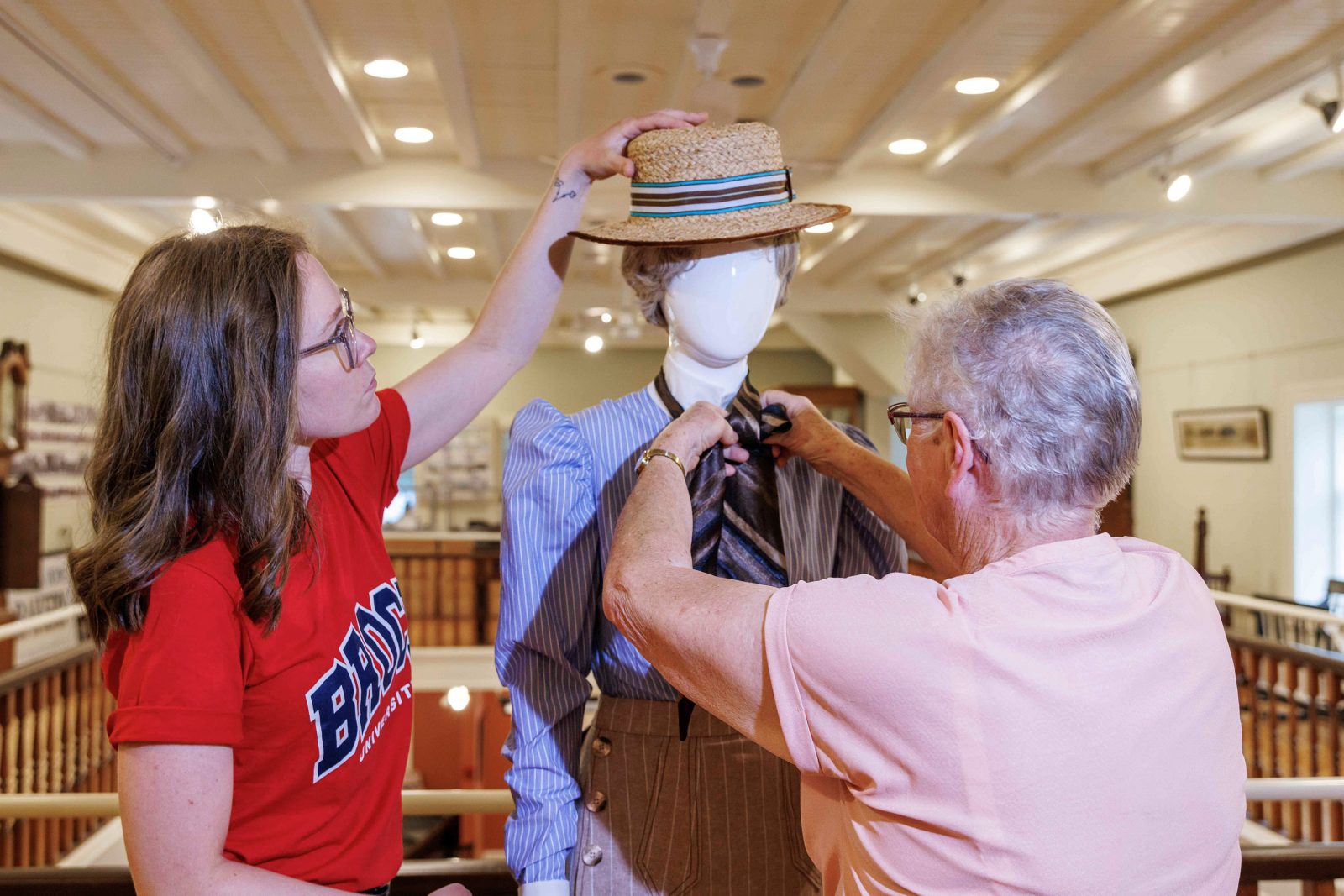 Paige Groot (BA ’22) and volunteer Pam Mundy (BA ’21) dress a mannequin in a 1900s cycling outfit Mundy recreated for Groot’s latest exhibit. Groot, who will begin in Brock’s Master of Arts in History program this fall, has been putting her history skills to work this summer at the Niagara-on-the-Lake Museum.

Paige Groot (BA ’22) spent the summer diving into diverse aspects of Niagara’s history in hopes of encouraging members of the community to do the same.

The Brock graduate, who begins in the University’s Master of Arts in History program next month, has been working at the Niagara-on-the-Lake Museum researching and developing three exhibits that will remain on display into the fall.

Groot’s first exhibit celebrates Niagara’s Women’s Institutes and focuses on ways the local branches contributed to the community, including the role of the Allanburg Women’s Institute in the founding of 全球电竞直播 .

Her second exhibit, which marks the anniversary of the Battle of Queenston Heights, examines how commemoration of Maj.-Gen. Sir Isaac Brock eclipsed the roles of Indigenous warriors and the Coloured Corps in the battle.

“I thought it would be really interesting to look at how we commemorate the Battle of Queenston Heights,” says Groot. “I decided to look at all the commemoration we have done for General Brock and how the battle has become synonymous with Brock’s death and his title as the hero of Upper Canada.”

Groot’s third exhibit is a snapshot of the history of cycling in Niagara, including the cycling corps that trained in Niagara-on-the-Lake during the First and Second World Wars, and the impact of cycling on women’s fashion.

“Most women’s cycling suits were designed and patented by women,” she says.

A cyclist herself, Groot had the opportunity to wear an early 1900s women’s cycling outfit reproduced by museum volunteer Pam Mundy (BA ’21), and even tried out events from the 1898 bicycle gymkhana held at the Queen’s Hotel. The original tournament included cycling races such as the egg-and-spoon race, parasol race and tortoise race that was won by the slowest rider.

“It was really fun. The major difference between how the participants in the 1890s would have competed and my attempt is that I was riding on a modern bicycle, on a well-paved road and wearing a helmet,” Groot says. Participants in 1898 would have been using less sophisticated bicycles, wearing more voluminous clothing and riding on grass.

Groot says the research and writing skills she acquired during her time in Brock’s History program, including through projects such as the Garden City Arena oral history collection , have been key to her success.

“You don’t make a museum exhibit on secondary sources,” she says. “You have to be able to use primary documents and objects. Being able to find those objects and use them to develop your research is an important skill.”

Exhibit work is a different type of storytelling than academic essays, Groot says, and she has learned how to use the skills she developed in her degree to communicate history with the public.

“The Niagara-on-the-Lake Museum is fortunate to have hosted knowledgeable and dedicated Brock students each summer,” says Sarah Kaufman, Managing Director and Curator of the NOTL Museum. “Their bright energy helps infuse our community with love and appreciation of local history.”

Kaufman says the museum is pleased to provide hands-on experience for students through a variety of work, including handling the museum’s collection, researching and developing small exhibits and engaging with the community through programs and events.

“Staff are happy to help students on their educational journey by showing how the knowledge they have obtained in the classroom can translate into real-world experiences,” she says.

The Niagara-on-the-Lake Museum is owned and operated by the Niagara Historical Society and is one of Ontario’s most important local collections. Home to more than 8,500 artifacts and 41,000 documents, the museum tells the story of Niagara-on-the-Lake from Indigenous settlement to present day.