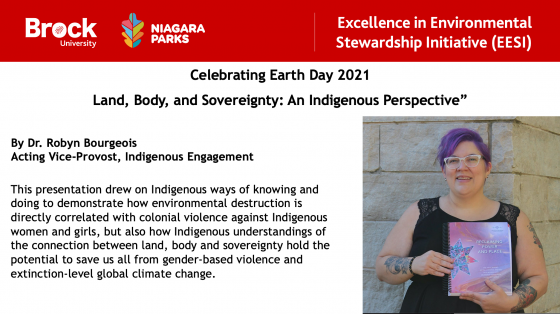 On Earth Day especially, we must look to and honor Indigenous People’s traditional knowledge, ways of knowing, and relationship with the land. Indigenous Peoples were the first stewards of this land and far before colonization, they lived sustainably and in harmony with the land and continue to do so. As the climate crisis unfolds, people across the world are attempting to understand what sustainability truly means and how we can shift our societies towards more sustainable ways of living. There is much that can be learned from Indigenous Peoples, and their voices must be lifted and followed. This Earth Day, the Environmental Sustainability Research Centre (ESRC) asked Dr. Robyn Bourgeois, Vice-Provost Indigenous Engagement and Associate Professor for the Centre for Women’s and Gender Studies, to present her work surrounding the intersection of environmental and social justice.

Preceding Dr. Bourgeois’ talk was a presentation from a group of undergraduate students taking part in a directed readings course. As Applied Health Science students, they focused their course on decolonizing health and cultural safety. The students created an experiential learning experience, where they were able to engage with Indigenous communities and Elders. The students built their own learning objectives and course culture which revolved around the “four R’s”: respect, responsibility, reciprocity, and relationships. These students found that the relationships they formed together and with Elders, enhanced their understanding of Indigenous issues in Canada, while also allowing them to take part in a transformative learning experience.

Using traditional Indigenous knowledge, Dr. Bourgeois described how Indigenous women face dangers associated with colonialism, systemic racism, and sexism. One perspective that may be new to many is how the environment is related to these issues. Meaningfully addressing gender-based violence offers a resilient pathway to solve the genocidal climate change issue we are facing. As Dr. Bourgeois said in her presentation, “people will not respect the land until they respect women”, reminding us that environmental issues and Indigenous issues are very much connected and should be addressed together.

Social justice issues can transcend boundaries and manifest in both physical and non-physical ways. Dr. Bourgeois explained that colonialism is no exception, and pulling from examples of her own experiences, informed the audience on how harmful conditioned colonial perspectives influence the way in which Indigenous women are treated in society.

To begin addressing gender-based violence and environmental violence, further awareness and education is needed.  At the end of her presentation, the audience asked Dr. Bourgeois for additional resources to further educate themselves and raise awareness of the issues she discussed. This list will be provided in the coming weeks on our blog and on our social media channels. To watch Dr. Bourgeois’ talk, please click here .